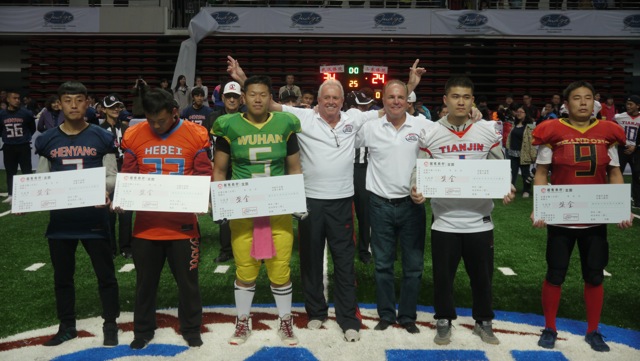 WUHAN, CHINA – If there remained any doubts about the future of US-style football in China, they were resolved on a chilly, rainy night in the mid-land of China, in Wuhan. “I never had a doubt. Others did. Not me.” That was Marty Judge speaking from the center of the playing field inside Guagghau gymnasium, the fans still leaning over the rails, still cheering for the champions of the just concluded Deheng Cup. Like a great Hollywood script, they were cheering the home team from Wuhan University. “Look at all the people, listen to them,” Judge explained, fists punching the air in their direction. It was hard not to. The noise level was so high, even Judge was hard to hear, and if you know Marty Judge, that tells you a lot. They didn’t do a turnstile count at Guanggu Arena, they probably didn’t think they would need to. By my own count, I put it at around 3700 in the seats, and piled 4 deep on the sidelines for this, the championship game. Mind you, they were watching a sport that didn’t exist on the Wuhan Sports university campus until basic tryouts were held in June of 2013. And there had never been a real game staged here. Maybe it was the fact that it was the home squad on display. Maybe it was the fact (evidenced by their reaction to the key plays) that a new, young generation of Chinese are watching football on TV, more likely on a mobile device. Probably it was both, and it all worked for Judge and his CAFL crew on this memorable, perhaps historic night.

Oh, the game was memorable too. Truly memorable. Learning and adjusting to the complex rules of the game has been the leading challenge for the 6 CAFL-sponsored college teams. In a wonderful step forward, the championship game between Wuhan (“The 9-Headed Warbirds,”- love it!) and the Shandong “Flames” was so well played, you forgot there were US and International officials on the field. Which made the play on the field a pleasure for any football fan, especially the passionate and vocal Wuhan supporters on hand.

Wuhan, trailing Shandong (winners of the inaugural China University Football Championships in 2015) 18-6 at the half, outscored Shandong 28-6 in a furious second half comeback for a resounding 34-24 victory that left the crowd screaming, pounding their seats, and roaring for more. “Its wonderful, isn’t it?” Phil Bogle, one of the US coaches who had flown over to observe and instruct, had a smile on us face as big as the former NFL lineman’s body. “The intensity of the players on both sides, played off the fans. I think US-style football in China may have been born here tonight, and I am so happy to be part of it.” Darrick Branch is a former US pro wide receiver, who has been on the ground with the new league and actually helped select the original Wuhan roster, mainly from Sports University’s powerful basketball program. “I remember when we first saw these guys. They could really run, and jump, but they couldn’t even catch a football, let alone throw one. Look what they did tonight. I’m amazed, but I should have realized, these are top flight athletes, and tonight I saw that they love this sport of football.”

But it did not go well for Wuhan at the start. Shandong opened the scoring. Their program features many from their school’s rugby program, and for the second straight year they were confounding Wuhan with their clever ball handling and pitches. Wuhan responded with their own patented approach, a series of long, high passes to their towering wide receivers. Two of them are over 6′ 6″ and the two combined for 17 receptions and 4 touchdowns. The crowd got with it the first time the fog horn sounded for the home team after their first score. A lob pass – what else? . But Shandong sounded their own tone when they slammed a Wuhan ball carrier on a 2-point run attempt, and for the rest of the first half, it was all Shandong, as the Flames posted two more touchdowns . 18-6 Shandong at the break.

The crowd, already showing some knowledge, seemed restless with the deficit. The CAFL staff, well schooled in arena-style entertainment, kept them happy throughout but especially at the half, with a wonderfully choreographed series of on-field games featuring local grade school children, as well as traditional Chinese dance presentations, and cheerleaders who would wow any US arena. And that didn’t compare to the frenzy, when Bogle and his fellow US coaches like Derek Stingley, sparked the crowd by hurling CAFL footballs and t-shirts into the cheering grandstands.

No cheer was bigger though, than those for the biggest Chinese football player on hand. Former Virginia Tech star, and NFL veteran offensive lineman Ed Wang was cheered whenever he drove his 6-5, 290 pound frame onto the field. Wang may have the national star power to become the face of the game in China, and he is now a full time member of the CAFL Beijing-based organization.

Some time later, In the midst of the outright joy and celebration when it was done, I interview key members of the eventual winners, the Wuhan team, including the quarterback and the two towering receivers. See if this doesn’t sound like they have been watching and listening to the US telecasts:

* “At the half, we know could win, we just need to stay calm, and come back one score at a time”
* “Thank for the compliment, but this was a team effort, I was just doing my part. All credit to the team”
* “I want to thank all the fans who came out, they really motivated us. We wanted to win for them”

And they did. Trailing by 18-13 with 8:12 to go in the third quarter, Wuhan shocked everyone, especially the Flame defenders, when their QB pitched to a circling slot receiver, a patented sweep-run right. Instead, the ball carrier suddenly raised up, cocked his arm, and fired far downfield, a pass covering 33 yards for an easy touchdown. The fans exploded, Wuhan’s bench nearly pushed over the sideboards in delirium, and the “Nine-Birds” took a lead they would never lose. In fact, after that, the Flame in Shandong was virtually doused. Finding that momentum, Wuhan kept at it. Again and again they targeted and found their Twin Towers – for touchdown passes of 30, 32, and 38 yards. The final, and the proverbial nail in Shandong’s coffin came on yet another receiver to receiver pass, this time capped with a sensational end zone grab.

The CAFL put on a wonderful post-tournament ceremony, honoring each player, coach and official, including those form X’ian, Shenyung, Hebei and Tinanjin Sports Universities, but a telling moment remains for this reporter. The two teams of finalists were stretched out in single file on either side of midfield, facing each other. All plaudits and formal honors were being tossed to the winners from Wuhan, positively glowing in green and gold. All eyes, it seemed, it seemed on the Nine-Headed War Birds. My own eyes the other way, towards the squad from Shandong. There in their center stood a stout young man, wearing number 50, who looked every bit the US football warrior; bruised, battered, jersey torn, socks soiled with a spatter of blood, but quiet, respectful towards the victors – but rolling down his face in defined currents came a steady stream of tears. Any true competitor know the bitter-sweet feeling. And right then I knew, that football, US-style in China, is here to stay.

LTM (Lou Tilley Media) is on site in Wuhan for the tournament this week. Look for Lou Tilley’s stories and insights as well as multi-media from the LTM team who are on site to capture the content of the evolving story of The CAFL.

The China Arena Football League (CAFL) will be showcased in Guanggu Gymnasium at Huazhong University of Science and Technology in Wuhan, Hubei province, from Nov 3 – Nov 7.