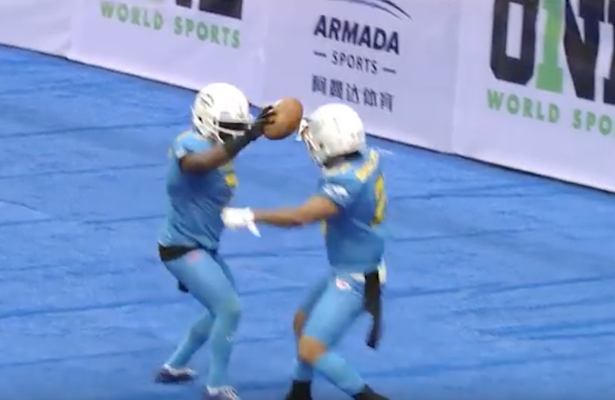 As the 232 players, coaches, trainers, staff and media that make up the CAFL Super Series Tour boarded yet another bus, for yet another flight, to yet another city, their lifelines to the world flickered off more than on. “Hey, you getting any Wifi?” That’s a question you hear a lot on this sojourn. As anyone knows who spends anytime in any airport – in any country – the answer is usually no, no matter what your smartphone shows.

So when our traveling troupe got to the glistening Guangzhou Hilton, started to unpack, tried to settle in, and began to re-connect on-line, they got a very big, and welcome surprise. Seemingly out of the ether, The Sports World had discovered them, and the new CAFL. As near as I can report, and I have been reporting for a long time, the phenomenon began early in the am before we left our last stop, the city of Qingdao. I was writing my weekly wrap-up column on the Super Series III weekend of play for China Daily News (as the broadcast and communications director of the league) I saw an email request from a well known US sports news site asking to use some of our footage from the new CAFL YouTube channel in the US. “Sure, I wrote,” just make sure you credit the CAFL TV Network. And that was all it took. A small spark that lit a fire. By the time our jet had taken off from Qingdao, and touched down in Guangzhou, the wild and woolly CAFL was “taking off” in the modern media.

It is one of several weekly “Best of” highlight reels that the content team of LTMedia develops each week, culled from the three weekly CAFL games we televise. Inside were the spectacular and creative displays of fun and enthusiasm that CAFL fans had been watching in person and on national TV throughout China (on the iQIYI Network) and in the USA (on ONE World Sports) for 3 weekends and 9 total games. What seemed to get the ball rolling, was writer’s comparison of our free wheeling super-charged end zone celebrations, compared in stark contract to a US league called The NFL. And then -it exploded.

I imagined the search engines that drive modern media news sites. Managers gathering their producers and writers and demanding “why don’t we have this? This is great video! Just look at all the hits those other guys are getting.” When I unpacked, and logged back on to my laptop, I was looking at more than a dozen new requests for video usage. And – they were coming from the very best and well known sports outlets in the world. ESPN, Fox1, CBS Sports Net, USA Today, CNN, SB Nation, The Bleacher Report to name just a few. And those spawned still more. To date we have tracked 31 media outlets, with a reach of over 45 million subscribers re-airing our ” CAFL Grooves of the Week” video. One network even chopped the TD celebrations shown into 6 pieces, with captions for each TD dance. Acrobatic (in more ways than one) receiver Mike Washington has become an internet sports star overnight. So have James Romain and Dashawn Johnson and many others from the new league.

Views on the ESPN site alone exceeded 1.2 million at last count. The AFL-China Facebook page saw a rise of activity of 1000 percent in the first 24 hours since the CAFL “dance virus” was released into cyberspace, with 130,000 “likes” in less than 2 days, after a very respectable 13,000 in the entire week before.

At the same time, there was a significant surge in hits at the CAFL’s two managed websites: CAFLChina.com (here) and CAFLfooball.com (in the US) to the tune of a 400% gain. And on iQIYI, the CAFL Football Network’s exclusive platform on mainland China, the highly popular network reported a spike in live as well as on-demand viewership of the games and related content that “placed the CAFL on par with viewership of the NFL” on their streaming site, according to a network spokesperson.

Better still, text stories began to accompany the videos.  “More fun than the NFL” said one major news site.  Another said “The celebrations and dance routines in just one game we watched are unrivaled in all sports – can you just imagine what the whole CAFL season will be like!?”  But the best and most effusive praise came from  CBS Sports Network, whose writer wrapped up his story by stating simply –   “Its official. the CAFL is now your favorite pro sports league.”

Around the team hotel, the players, 7 weeks into a a grueling 10-week tour, suddenly had smiles on their faces – and, ahem,  a little “dance” in their step.   “We just love playing football,” said Washington, a long time US indoor pro who is watching his career re-ignite as a member of the Shanghai Skywalkers,  “I have been loving playing in front of all the Chinese fans who are coming out wherever we go.  They have never seen our game before, and I know they have never seen the kind of fun we have – and the fun we have up close with them. And now to find out the the whole world is watching, and liking it – wow – I just cant wait to get out there again and give them something new!”

It all continues this Saturday at 2 pm and 7 pm, and Sunday at 3 pm from Guangzhou on the CAFL TV networks (In the US, ONE World Sports, and in China, the IQIYI Network.)

With the official announcement of approval from the China government, the new professional league will be called CAFL (China Arena Football League), and the Beijing based operating company, formerly known as Ganlan Media International, will carry the same name.

“We think this acronym says it all,” said David Niu, the President of AFL Global, the founding corporation based in Conshohocken, PA, USA. “The league, and all of our efforts, are unique to China. We want to highlight the fact that we are playing American-style football, not to be confused with soccer. And we want to emphasize that this is China’s first ever professional league, played by the best players in the world.”

Many of the rosters will feature Chinese players, who have been learning and training for the arena game specifically for over a year, at 6 select Chinese Universities, under the guidance of AFL Global.

CAFL headquarters are located in Beijing, with leadership comprised of senior media executives and sports professionals with an array of government and commercial experience.