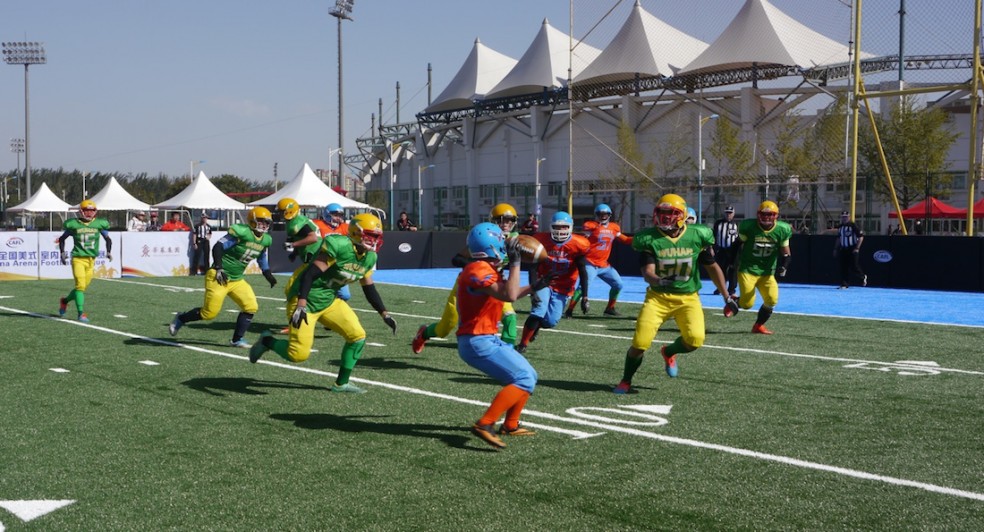 A four-camera videography team will gather in Wuhan the week of November 1-8 to document the 2nd annual University Arena Football Tournament,  now named the DeHeng Bowl, presented by The DeHeng Law Firm.

The round-robin event features the six university-based teams supported by the CAFL in full tackle competition from Nov 3-7, 2015. All games will be played at Guanggu Gymnasium at Huazhong University of Science and Technology in Wuhan.

“This is a great opportunity to see the progress of the college-level programs the CAFL founded in 2013″ said Lou Tilley, whose LTM team created the initial training program in video and text form in conjunction with coach Andy Talley’s Villanova Wildcat coaching staff. “Beyond that, we will be watching with a critical eye to see which of these young athletes might be ready when we kick off our professional league in 2016. For our missions, my producers and videographers will be targeting the great stories and themes that we might use in our initial marketing and promotion for mass and social media as we launch.”

Leo Switucha, LTM’s DP and EP will accompany Lou on their 12th trip to China together . “We will work with a team of China-based production professionals, some of whom I worked with a year ago in Beijing, and another duo who have relocated from the US and with whom we collaborated when they were the NFL Films.”

Tilley, Switucha, and David Niu (President of the CAFL’s parent company, AFL-Global,) will be busy and on the move outside of the football arena, as they meet with many of the China’s leading TV Networks, and digital media providers. “This is the golden era in China when it comes to Sports on TV” said Tilley. “In the relatively short time I have been going over there, I can honestly say I saw it coming, but not this fast. As with most things in China, they have carefully observed the explosion in sports content, sponsorships and marketing around the globe , and they want to be in the lead.
We hope to provide a great and exciting new element to their markets with US-style arena football!”