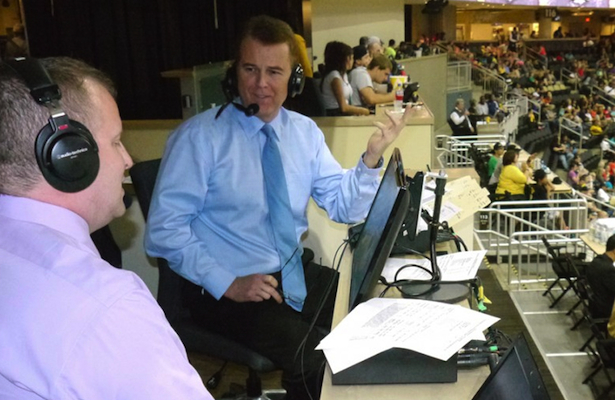 With its historic kickoff less than 48 hours away, the CAFL announced its starting lineup for their two broadcast booths.

CAFL Director of Media, Arena Operations and Communications Lou Tilley, who is also the CAFL TV Network Executive Producer, conducted dozens of interviews and live rehearsals before filling out his lineup card for the October 1 debut on ONE World Sports ( in the US ) and iQIYI – TV ( in China. ) “You would not believe the numbers of interested broadcasters I heard from, and from all over the world. The US broadcast, that was the easy part. The challenge was finding Chinese speaking professionals who had at least a fundamental knowledge of the sport,” said Tilley who will take one of the seats himself, at least initially. “I am more concerned with the production of these events, and would like to move more into the role of director or game producer in time. At the stat, however, there really is no one who understands our core message hat we need to communicate better – and that is, how this whole thing started, how we got here, and where we are going with this enterprise.”

Mick Moninghoff, one of Lou’s “go-to” guys when Tilley was the EP of sports with The Comcast Network a decade ago, has been selected to man the play by play microphone. “Mick’s work ethic is beyond compare. I couldn’t think of any one man who could wear as many hats as we have asked of Mick. And he does them all with exceptional dedication and attention to detail. He has filmed practices for our coaches, interacted with the local arenas, coached our China announcers, put together our pr materials, and still filed his own stories. He has been indispensable. Oh, and he’s a fine announcer” said Tilley, an 11-time Emmy winner in his main-stream broadcast career that included anchor stops in Philadelphia, New York, Washington, Boston, Baltimore and Charlotte. Ironically, while attending Wake Forest on a football scholarship the former linebacker was part of a cross-global initiative in which the Deacons helped teach US style football in Japan. “Yes, you could say I spent most of my life preparing for this.”

Moningoff and Tilley’s English speaking team will share a sideline reporter with the Chinese booth. Sandra Parks, a native of Taiwan, and fluent in both languages, will present her stories in both languages in simultaneous reports to both network feeds. “I have to believe this is a broadcast first” said Tilley. “The trick will be for both teams to toss to her at the right time, but that seems pretty simple compared to what she will do!”

Handling that task for iQIYI, and in Mandarin, is China native Wuzhi Lu. An accomplished anchor man and political reporter for China’s leading national network CCTV, Wu moved to US for more than 10 years and mastered English as well. “I found Lu when I needed someone for translations 4 or 5 years ago, in the early days of this project, and was struck by his vocal skills as well as his presence. Our media team began grooming him for this role from day 1. I think he is going to be a big star here, and as our sport grows, he will be the voice that defines it.” Wuzhi has been another multi-tasker for the startup network and league. “Lu has been a great help in our negotiations with the Chinese TV networks, as well as the technicians we need in order to pull off this unique split language and graphics production. Plus he digs in there with all of us to grind out the daily pr and content that we need to make this a success.

Joining Wuzhi Lu for the first-ever US-style football game in China will be Daton Wang. Wang moved to Hawaii while a youngster, and there was an outstanding player. Since moving back to his native land, Daton had been a coach for local club teams, and has become a popular commentator on NFL football for the PPTV network. “I was in Shanghai for workouts this past summer,” notes Tilley, and picked him out right away. He was acting as an assistant for one of our head coaches (JW Kenton of the Shenzhen Naja) and when I introduced myself, I was shocked that he answered in fluent English. We proceeded to have a great debate about the Philadelphia Eagles, my hometown team, and I was impressed. When I learned of his TV background, and that he was already in our group, I hoped I had found our color man.” Backing Wang up on days when his Naja team is in action, is another member of the CAFL roster, Chao Ran Lei, the kicker for the Qingdao Clipper. He too has network TV experience in China. “It really is a toss-up between these two guys for the first game, but the schedule decided it. Lei is set to kick off for the Clipper in the the historic game one on Saturday.

“Right now, I think our best bet is to develop our own pipeline of talent, says Tilley, who helped develop the broadcast skills of many popular former players like Randall Cunningham, Eric Allen, Gary Cobb, and Guy McIntyre.

“We have been conducting announcer seminars for our CAFL players who are interested in expanding their horizons. US players like JJ Raterink, Duane Brooks, Christian Wise, Justin Lawrence, Colin Taylor and Paul Chang are already working with us, and I hope to find air time for all of them. We will need them all when this thing really takes off next year!”

Pulling all of this together is Executive Broadcast Producer Leo Switucha. The longtime partner of Lou with the Lou Tilley Media Group, Switucha brings cohesion, depth and creativity to the team. “He’s a calming influence for us from the truck,” reflects Tilley. “His organizational skills are at the heart of any success we might experience with all the moving parts involved in this multi-network, multi-language production.” Switucha, a former executive with a major east coast cable company in business development and ad sales, has an MBA from Drexel University. “On top of that he manages to be our Director of Photography, our top graphics artist, and best editor” says Tilley.

Teamwork – on the field and off – at the heart of the CAFL.